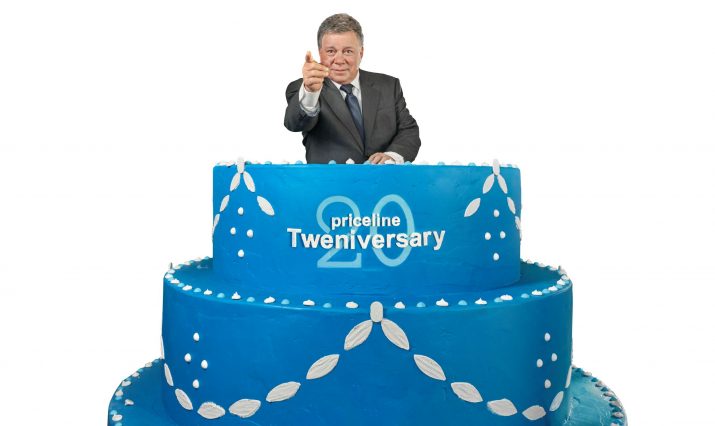 The Tweniversary! Priceline Celebrates 20th Anniversary with $50 Million in Savings Over 20 Days and Biggest Sale in Company History

NORWALK, Conn.–(BUSINESS WIRE)–Priceline.com® was founded in 1998 on the back of a single transformative idea: if you give consumers the power to book discounted travel deals, they will wield that power in ways that will remake the world of travel. Over the past two decades, that premise has fueled priceline’s rise from fledgling dot-com startup to one of the world’s largest online travel companies. To thank travelers on the eve of its 20th anniversary, priceline today introduced the “Tweniversary” campaign, which includes 20 consecutive days of deals, and extensive discounts across all of priceline. This is the largest sale in priceline’s history.

Tweniversary was developed to help travelers save $50 million over 20 days. A new deal will go live each day at 6am ET from Monday, April 30, through Saturday, May 19. The deals include savings on thousands and thousands of flights, hotels, car rentals, cruises, travel packages and credit card rewards. The promotions are tied to many of the world’s most sought-after destinations, spanning North America, Latin America, Europe and Asia. The campaign will also include offerings specific to Mother’s Day.

Priceline’s Tweniversary offers can be accessed here beginning today. They can be found via priceline’s mobile app, which always features the best deals available in the priceline universe. Alerts and surprise deal announcements will also regularly be featured on priceline’s Facebook, Instagram and Twitter channels.

“For our 20th anniversary, we decided to offer travelers priceline deals at an unprecedented scale,” said Brett Keller, Chief Executive Officer, priceline. “Helping travelers save money is the core of what we have always done. When we started, we knew that there were millions of people who wanted to travel, but didn’t want to pay published retail prices. And we knew that airlines and hotels and car rental companies wanted to engage with those people. So we brought them together on priceline, and we’re all still celebrating two decades later.”

The Return of “The Negotiator”

To commemorate Tweniversary, priceline has developed a new ad campaign starring William Shatner. Shatner, the prolific actor, author and singer, began working as priceline’s spokesperson in 1998. His twenty-year affiliation with priceline ranks as one of the most enduring celebrity partnerships in advertising history. As “The Negotiator,” Shatner helped travelers understand that priceline was there to negotiate the best possible deal on behalf of each customer. That priceline offered deals that were not available elsewhere.

“When I first signed on to serve as a spokesperson for priceline, it was 1998. I was so excited to represent a dot-com company that I agreed to be compensated in stock, which was unusual for me. I saw it as an investment in my future,” said William Shatner. “I didn’t know then that this relationship was going to extend for two full decades! Priceline.com continues to grow, and our relationship keeps evolving in new directions. I’m happy to have played my part in helping people save money when they travel. My advice is this: keep negotiating. There’s a deal out there for you. Find it on priceline and book it.”

“To give you some sense of William Shatner’s impact on priceline, I have to go back to day one,” said Brett Keller. “In January of 1998, the company began advertising the priceline brand, weeks before the platform was live. On launch day, top executives sat in a room with the technology team, and made the call to turn priceline on. Our servers immediately crashed. Everything went dark. We rebooted and tried again. And they went down again. We realized this was due to consumer demand. Mr. Shatner had so excited the traveling public before priceline’s launch that on day one, we couldn’t handle the volume of people visiting the site. Of course we solved that issue, and everyone agreed that this was the nicest problem a new company could have. Over 20 years we have evolved the site to make it faster and easier to find great deals, and that evolution never ends.”

Tweniversary is a multichannel campaign. It will run nationally on television, and across digital channels. To view the Shatner commercial that priceline has developed for its 20th anniversary, click here.

A Brief History of Priceline

Priceline was founded by the famed entrepreneur Jay Walker. Walker’s vision – that the Internet could shift the balance of power in travel, putting it into the hands of consumers – was the reason priceline came to be.

Priceline first began offering what is known as “perishable inventory” in travel: seats that the airlines could not sell at retail rates. The airlines balked at first. Over time, more carriers began to participate, and in doing so, saw that they were filling seats that would otherwise go unused.

At first, priceline encouraged travelers to “Name Your Own Price”® for flights. If an airline had a seat at the price you posed, you got it. Priceline then began offering rental cars, and then hotels. In each sector, there was and is a sizable amount of perishable inventory, and the priceline marketplace benefited both suppliers and travelers in equal measure.

Priceline now offers a wide range of deals, spanning flights, hotels, rental cars, vacation packages, cruises, alternative accommodations – such as condos, homes and apartments – and more. Priceline has evolved its booking mechanism and is now optimized for the needs of the modern traveler, with mobility, ease and speed at a premium. Priceline gives travelers visibility into the prices available across the travel industry, both discounted and at retail. This empowers them to make decisions that most closely match their budget, timing and preferences.

Priceline, part of Booking Holdings Inc. [NASDAQ: BKNG], is the leader in online travel deals. Priceline offers travelers smart, easy ways to save on hotel, airline, rental car reservations, packages and cruises. With access to more than a million lodging properties of all type, consumers can find the right accommodations, as well as free cancellations and the option to pay upon arrival. Priceline’s Express Deals® offer exclusive savings without bidding, and our Name Your Own Price® service delivers the lowest hotel prices available. With Priceline, travelers can save at every stage, freeing them up to enjoy their trip even more.