NORWALK, Conn., September 16, 2014 … Tourists traveling in search of an authentic, cultural experience, who have previously fallen victim to tourist traps, can now get the full scoop on the best ways to travel like a local.  Priceline.com, a leader in online and mobile travel and part of The Priceline Group (NASDAQ: PCLN), today released its 2014 Tourist Report Card, uncovering the latest in the ongoing “saga” between tourists and locals.  According to the study, nearly all tourists think they blend in well, while 94 percent of locals admit they can at least sometimes spot a tourist just by looking at them.  However, while locals know tourists can be guilty of clichés and stereotypes, 84 percent still say they find tourists more friendly than annoying.

“At priceline.com, we’re committed to understanding travel trends and traveler needs and preferences,” said Chris Soder, priceline.com CEO. “To get the full picture of what our customers want, we strive to ground our services and product innovation in research.  That’s one of the reasons we conducted the ‘2014 Tourist Report Card’ study – to monitor the shifting travel attitudes, perceptions and behaviors of consumers.”

Priceline.com’s new study exposes tourists’ secrets to blending in, locals’ biggest tourist pet peeves, and the most and least welcoming big-city destinations in the U.S., among other key findings, including: 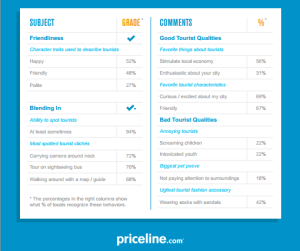 The full report can be found here.  For more information on priceline.com, visit www.priceline.com/media/ or join in the conversation to share your #touristtales on Facebook and Twitter.

The Tourist Report Card was commissioned by priceline.com and conducted by Edelman Berland (www.edelmanberland.com) among nationally representative U.S. adults, ages 18+, between July 21 and July 30, 2014.  Two quantitative surveys were conducted, the first among 1,002 U.S. tourists who have traveled out of state for leisure purposes in the last year or planning to travel out of state in the next year and the second among 1,054 U.S. locals having lived in the top U.S. tourist destinations for a minimum of five years.

Priceline.com, part of The Priceline Group [NASDAQ: PCLN], gives leisure travelers multiple ways to save on their airline tickets, hotel rooms, rental cars, vacation packages and cruises.  In addition to getting compelling published prices, travelers can take advantage of priceline.com’s famous Name Your Own Price® service, which can deliver the lowest prices available, or the recently added Express Deals®, where travelers can take advantage of hotel discounts without bidding.