NORWALK, Conn., Jan. 9, 2013…One year after stunning millions of William Shatner fans by dropping his “Negotiator” character off a bridge, priceline.com (Nasdaq: PCLN) is back with a new TV campaign —and another shocker.

The Negotiator will reveal that he has a secret child, and she is none other than Kaley Cuoco, star of the hit TV series “The Big Bang Theory.”

The campaign, which begins running January 14, will showcase priceline.com’s family-friendly Express Deals(™) hotel reservation service, where customers don’t have to bid and can get quality hotel rooms (even choosing their bedding type in some cases) at savings of up to 45% over published rates. The new ad shows The Negotiator driving to the top of a mountain with a little girl and dropping her off in front of a mysterious dojo.

Decades later, he returns to pick her up; she is now an adult, and after years of intense training, is, like her father, highly skilled in the art of finding the best travel deals. And she may have even learned some techniques that eluded dear old Dad.

“The Negotiator harbors many secrets, and this is just one of them,” said Mr. Shatner. “It’s another layer to the enigma of The Negotiator that shows us there are many different ways to find great hotel deals. And, as in life, there is something new he can learn from a younger perspective.”

“It’s definitely exciting working with Bill, and being part of a campaign and a brand that I’ve pretty much grown up with,” said Ms. Cuoco. “He has single-handedly built the Priceline Negotiator into a pop culture icon. I think there’s a lot of overlap in our fans, who will appreciate seeing us together as a father and daughter team. And who wouldn’t want to be William Shatner’s daughter?”

“The customer base for online travel services continues to get both younger —and older —as Internet usage becomes more commonplace and mobile devices make it possible to book hotels, rental cars and airline tickets from almost anywhere, at any time,” said priceline.com’s Chief Marketing Officer Brett Keller. “The collaboration of William Shatner and Kaley Cuoco will enable priceline.com to reach the different parts of that diverging base with a compelling and entertaining priceline.com message. We look forward to working with both of them as this campaign unfolds.”

Express Deals is priceline.com’s newest and most family-friendly hotel reservation service that can save up to 45% without bidding on a room. With Express Deals, customers choose the city, neighborhood and star-level hotel they want, and can see all of a hotel’s amenities (pool, on-site restaurant, gym) and, in some cases, they can even specify the type of bedding they want (two queens, one king, etc.). Express Deals listings also show satisfaction scores from guests who have stayed at the hotel. Room rates are pre-discounted up to 45% over published rates. After making their reservation, customers are provided with the name of the hotel and their complete itinerary. Customers who are looking to save even more —up to 60% – can still bid on a room using priceline.com’s Name Your Own Price® hotel service, or they can choose from the more than 201,000 hotels available on priceline.com’s global published-price hotel service. 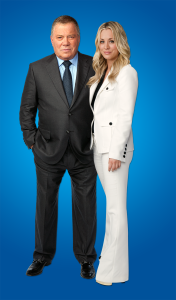